Beginning Of The Spiritual Work

When Shri Mataji wanted to start Sahaja Yoga she first confided in her father who counseled her: “Supposing you are born on the 10th story and everybody is on the ground floor; you must at least make them climb two stories so that they know there is something above, otherwise there is no use of talking about it.”

“I was seeking the ways and methods, working it out inside myself through my own style of meditation in the sense that I would work out all the permutations and combinations. When I met one person, I would see what problems that person had and how they could overcome them. I would try to study that person internally.”

The era of the world wars was over, and liberated nations were tasting their first years of freedom. However, a new freedom fight started, the fight for inner freedom. In this struggle many youths got lost in drugs, free sex and false Gurus (mainly from India) with their destructive tantric teachings. Shri Mataji was shocked to see how people were looted under the guise of spirituality.

Shri Mataji knew that the key to understanding the human dilemma lay in the ancient knowledge of the subtle body. She was familiar with a body beyond the physical. Such a corpus is real, composed not of flesh and bones, but of channels, energy centres and a primal energy source known as Kundalini. Its potential for real change reaches much further than medicine.

In the early morning, on May 5th 1970, in the seaside town of Nargol on the West coast of India near Mumbai, Shri Mataji opened the collective Sahasrara Chakra for humanity .

“As soon as the Sahasrara was opened the whole atmosphere was filled with tremendous chaitanya, and there was tremendous light in the sky, and the whole thing came on this earth as if a torrential rain or a waterfall with such tremendous force, as if I was unaware and got stupefied. The happening was  so unexpected and so tremendous that I was stunned and got totally silent at the grandeur.”

This was the commencement of Sahaja Yoga, the beginning of a new era where people would get their self-realization spontaneously, means without any effort. Shri Mataji’s discovery was and is unique. The opening of the Sahasrara is a moment of pure transformation, and it provides a method for everyone to reach beyond their limited human shells, of connecting with something greater. 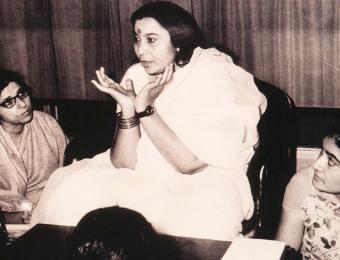 Sahaja Yoga started with a handful of seekers in Bombay and Delhi, but it was from England where Shri Mataji reached out to the western seekers. In 1974, Shri Mataji’s husband, Mr CP Srivastava, was elected as the Secretary General of the Maritime International Organization of the United Nations, and moved with his family to London. The Royal Alberta Hall was and is still the home of free public programs where thousands receive their self-realization. Shri Mataji  traveled tirelessly around the world, giving thousands of public programs, and conferences offering people of every race, religion and tradition, the priceless gift of self-realization.

“I cannot just give you a book by which you sit and read and say, ‘Yes, I know the self. I have got it, I have become.’ To know Thyself does not come from rituals or reading books; it has to be experienced on your central nervous system. It’s a real becoming, ripening, maturing, and living process. No doubt the books give a description of a person with self-knowledge – how he behaves, how his style is, but none of them explain how you become that. Perhaps most of them didn’t know about kundalini. So it came to my lot.”

The nobility of Her vision was so great that in the early years of Sahaja Yoga, She sold Her own jewelry to sponsor programs of Sahaja Yoga. She even  paid from Her own money the air tickets for so many new people who came to Sahaja Yoga to travel to and experience spiritual places in India. Shri Mataji has never accepted money for her unique work and all around the world classes of Sahaja Yoga are always free and open to all.

Sahaja Yoga Meditation is now practiced in more than 90 countries.