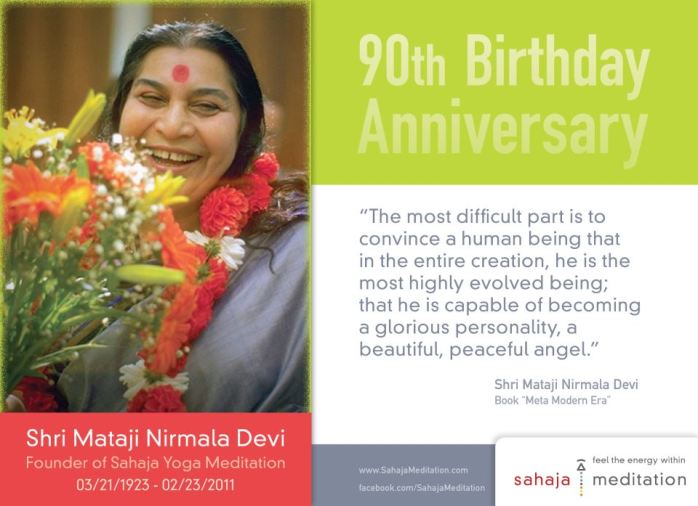 Today millions of people around the world are celebrating the 90th Birth Anniversary of Shri Mataji Nirmala Devi – the Great Spiritual Leader, the Great Visionary. In recognition of Her strength, love, devotion and compassion, many people call Her “Mother”. Those of us who have not heard or read about Shri Mataji Nirmala Devi could be surprised that the personality of such stature has not reached their awareness before… The impact of Her work and Her contribution to the well-being of humanity as a whole is hard to estimate.

When She was young, Shri Mataji worked with Mahatma Gandhi in the fight for India’s Independence. Her vision of universal peace and unity continues his dreams on a spiritual level. Gandhi recognized Shri Mataji’s spiritual gifts in Her early childhood and consulted Her on spiritual matters. Shri Mataji maintained that there is an innate spiritual potential – Primordial Energy – often referred to as “Kundalini”, within every human being, and it can be spontaneously awakened. She emphasized that this awakening, described as Self-Realization, cannot be purchased. Money has never been charged, nor will it be, for the experience of Self-Realization or for the teaching of Sahaja Yoga Meditation.

For more than forty years she travelled internationally, offering free public lectures and the experience of Self-Realization to all, regardless of race, religion or circumstance. Only in 1990, Shri Mataji conducted more than two hundred events in twenty-six countries, including Brazil, India, Australia, New Zealand, Russia, France, England, Poland, Spain, Italy, the United States, and many more. The distance she travelled in that year exceeded 83,885 miles, which was the equivalent of circling the globe three times.

Her unique discovery of a simple technique to trigger the awakening of the primordial energy, transformed millions around the world and many more are to come.

● Italy, 1986: Declared the ‘Personality of The Year’ by the Italian Government.
● Moscow, Russia,1989: Shri Mataji had a meeting with the Head of the Ministry of Health, USSR. Following which Sahaja Yoga was granted a ‘Full Government Sponsorship’ which included funding for promotion and scientific research.
● St. Petersburg, Russia, 1993: Inaugurated the first International Conference on Medicine and Self-Knowledge, which became an annual event at the Academy thereafter.

● St. Petersburg, Russia, 1994: Got appointed as Honorary Member to ‘The presidium of Petroyaska’s Academy of Art and Science’ and was told, “You are even higher than science.” Only twelve people so far have been granted this honor; Albert Einstein is one among them.
● Brazil, 1994: The Mayor of city of Brazilia welcomed Shri Mataji at the airport and presented Her with the‘Key to The City’, and sponsored all of Her programs.
● 1994: Nomination for the Nobel Peace Prize.
● Romania, 1995: Awarded Honorary Doctorate in Cognitive Science by Prof D. Drimer, head of the Ecological University Bucharest.
● Sydney, Australia, 1995: The Mayor of Sydney officially welcomes Shri Mataji during Her visit to Australia.
● Beijing, China, 1995: Official guest of the Chinese Government to speak at the United Nations International Women’s Conference.
● India, 1995: The Indian Government has granted Shri Mataji a one hour prime time television series, broadcast nationally.
● Sophia, Bulgaria, July 26, 1995: General Secretary of the international ‘Ecoforum for Peace’ expressed appreciation to Shri Mataji and wished realization of Her goals and ideals.
● 1996: Nomination for the Nobel Peace Prize.
● France, May 2, 1996: International Award ‘La Pléiade’.
● India, 1997: The ‘Unity International Peace Award’ by the Unity International Foundations. Shri Mataji’s name included to the List of The Greatest People of The Planet  for her fundamental contribution to the scientific and spiritual development. 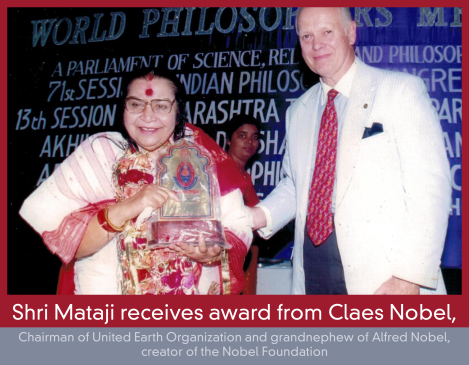 Awards and Recognitions in North America 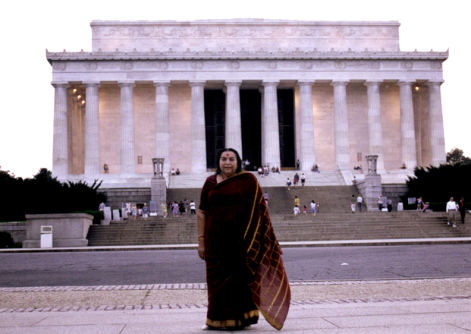 “Shri Mataji Nirmala Devi, the Mother, is recognized internationally as the most significant force in the world today and she will awaken in us the force that will change our life and change the world.”
– Dwight Tillery, Mayor of Cincinnati, September 10, 1992 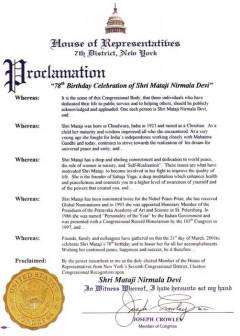 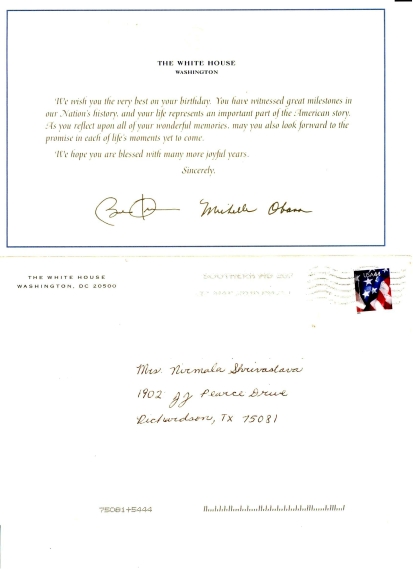 1. An international health center to help patients from all over the world to use Sahaja Yoga Meditation techniques in order to treat their ailments. This health center has been producing very successful results in alleviating the symptoms of a number of incurable diseases such as cancer, epilepsy and multiple sclerosis. (CBD Belapur, Vashi, India)

4. An international theater company whose international cast and crew has successfully toured throughout Europe, Australia, Israel, India and the USA. Its mission to produce performances that promote racial and cultural understanding worldwide. (TEV)

5. A number of educational establishments to provide culture, ethics and moral values in children have been established (ISPS-Dharmshala in India, Canajoharie-US and many others).

← The 4th Step: How To Feel Vibrations
Today I Am Wise →