Martin Luther King and The Art of Non-Violence 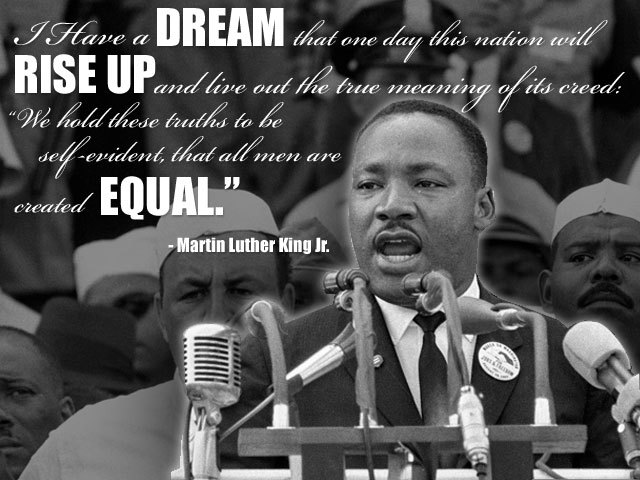 “I have consistently preached that nonviolence demands that the means we use must be as pure as the ends we seek.”

In a conversation with a friend we wondered what was it about Martin Luther King that made people follow him even if it meant to be beaten up, tortured or imprisoned. What was his secret? What his power? Do we have it, too?

The word “power” – according to the Oxford dictionary – means “to be able to exert a lot of force”. Most of us may associate it with domination and aggression. But there is another form of force, too, equally powerful.

Martin Luther King was such a force. A force that could sweep others away with him to walk a new way into a new future. A tremendous force of benevolence. Of a deep love for humankind. Of an understanding beyond the minds of his time. The power of non-violence. Of non-aggression. The power to not re-act (give back equally) but to act.

Throughout the ages the powers of dictators crumbled to dust and leaving them in the collective memory as the failures they were. But the powers of the kinds like Martin Luther King will shine through all the ages, bright like stars in the night sky, throwing their light on the path to build a new world that is benevolent for everyone, not just a few.

So while we honor the memory of Martin Luther King today maybe we can take a look inside to find a Martin Luther King there, too. In everyone of us there is a leader, too. Even in our smaller, day-to-day lives it is possible to have a heart of a lion, the goodness of a lamb and to hold our ground with heads high when we answer to aggression with non-aggression; to violence with non-violence.

We have the same power inside of us that forced an empire like England onto its knees in the freedom fight of India led by Mahatma Gandhi! The same power by which Martin Luther King inspired such a change in America! Maybe we will not become famous for it but the people will know their heroes amongst them! Those who made a difference in other people’s lives. Those who risk their lives daily to serve and protect. Those who find means and ways to make the world a better place. We all can be a part to make the dream of Martin Luther King a reality.

And if by any chance you wonder “How?” then  come and meditate with us!

Sahaja Yoga Meditation was Shri Mataji’s gift to the world therefore it is always and forever free! Join our meditation programs, learn what makes this practice so unique and powerful  –  For the love for this world, the people around you, and let’s not forget – for yourself, too!

“Love has to be unlimited. Unlimited love which binds the whole world. You have to become the agents of that, to become the people who can communicate that love.”

Join Our Daily Free Online Meditations for the East Coast/ US

For more information on how to join please register via: http://www.sahajayoganewyork.com/signup