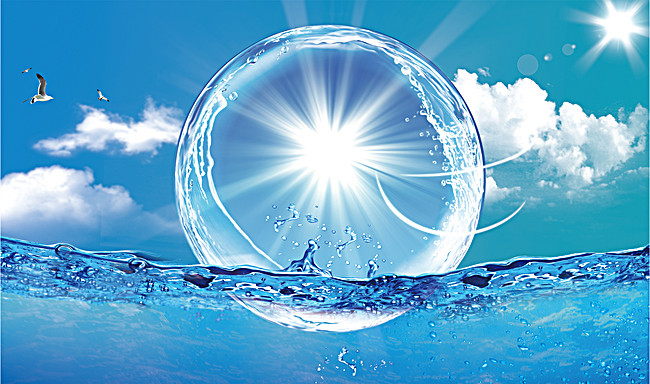 “As I told you, the drop becomes the ocean; and the drop has to become the ocean by dissolving all its ‘dropness’ with other drops. And all the drops dropping their dropness become the ocean ultimately. “ ∼ Shri Mataji, 08/06/1982

The Master (to his disciple):

“It is not only you who is separated from the truth, many are. I will tell you 12 short stories and to you they may sound very simple. But you have to chew on them over and over again”, he said, “many a hundred times, and when you believe you have understood them, then still do not stop chewing on them, so long until you have permeated them, until these simple stories have become sublime and from the sublime have become simple again.”

Once upon a time there was a water-drop in the ocean who claimed there has never been an ocean.

The same it is with many people; they stand in the midst of God and say there has never been a God.

“I want my freedom”, demanded the water-drop in the middle of the ocean; and the ocean was merciful and lifted him up to the surface.

“I want my freedom”, demanded the water-drop again – and the sun heard his call and lifted him up onto a cloud.

“I want my freedom”, he demanded again. The cloud let him drop and he was in the ocean again.

„Undoubtedly, one thing I have realized by now: much more significant am I than the ocean”, said the water-drop in the ocean.

„I probably will never meet the ocean“, sighed the water-drop in the ocean.

„Oh what do I care about the ocean“, said the water-drop in the ocean.

One water-drop could not accept his fate because he did not want to know anything about the ocean.

One water-drop in the ocean mustered together other water-drops, to rebel against the ocean.

„If I could succeed”, so the water-drop reflected, “that each and every water-drop could be in my love, then I would be the whole ocean.”

And so the water-drop began to take one after the other into his love. But there was a water-drop who once caused him terrible suffering, the worst grieve in his life and for all his love, him he could not forgive. And only because one single water-drop was missing in his love, only this one water-drop, he could not become the ocean.

“Tell me, oh Master, was there ever a water-drop who became the ocean?”

Thus know, full of mercy is the ocean for those who love it and welcomes them in all its abundance, if they truly desire so.”

“But what if such a yearning drop has accumulated all sorts of filth, what then?” asked the disciple.

“No water-drop can be so dirty, that the ocean cannot cleanse it.”

Find a free ongoing weekly meditation program near you in Connecticut or simply look up “Sahaja Yoga Meditation” in your city!

← The Totality that Is Love
How To Explain That Which is Beyond Rationality? →